Hi all! If you celebrate in some way I hope you’ve had a lovely Easter. In my little part of the world, we went back to Winter and had freezing temperatures and snow showers…Brrr! Anyway, apart from relaxing and enjoying great meals I still did a little sewing and today I’m talking about my first time sewing bras and I also have another little project or two to show you. I guess it’s a bit of a bitsa post…bitsa this, bitsa that! 🙂

To start with, let me take you back to early Spring 2020. The dreaded Covid pandemic was taking hold and I’d been in full sewing mode. I was working on my blazer collab and at the same time, I had started to show a little interest in the idea of sewing bras. This *interest* was borne from the fact that once again I’d realised I needed new bras, ordered several online to try and on trying them one discovered that not one of them fitted me well…ugh!

At the same time, I’d been following @birdy_sew_obsessed on Instagram and she had been making some beautiful bras, showing the whole process in her IG Stories (you should check her account out, it’s fab). This had piqued my interest and so the adventure and investigation began. I even ended up making a bra (more on that later) and at first, I thought it was a decent fit but I realised it squished me a bit flat and the top edge dug into me a bit. Then I attempted a lace bra and it was a complete failure. Both items got put away…and then my sewjo went missing (thanks pandemic!). I took three months off sewing and social media and by the time I started sewing again I had pushed the idea of bra making right out of my head.

Fast forward to this year and a couple of weeks back and my friend Emma of @emmasatelier on IG posted a lovely photo of a bra she had made. I messaged her to say how lovely it was and I bemoaned the state of my miss-shapen old bras and tatty old knickers. She challenged me to have another go at lingerie making…challenge accepted! So, after ages and ages of being in total denial at just how bad the state of my underwear drawer was, I finally decided to wrestle my bra making demons. Thank you, Emma!

In 2020, I’d spent a long time researching the bra making process before getting started. I learned about fitting underwires, fabrics, designs, altering designs and so on (I’ll give you all the useful links later). This time around I felt already armed with some knowledge and I just needed to perfect the cup fit.

My main discovery about bra fit was that in my RTW ones, once I got the cup size that works for me it turns out that the underwire finishes right under my armpit.  It was a lightbulb moment when I learned that I needed a smaller wire size compared to cup size (something you can only achieve with a custom bra). My shape is slightly Omega (like the symbol) which basically means the breast root is smaller than the breast volume. I went on to order a few different wire styles and sizes to try out and once I found a good shape and size for me, I stocked up on several.

The first pattern I tried was the Ruby bra. I made it in cut and sew foam and covered it in a silky jersey.  I messed about with the fit of the cups on this so much, but ultimately the bra I ended up with while looking great was not a good fit. It didn’t give me the shape I like and dug in a bit across the top of my boobs. I’ve come to the conclusion that I don’t want to mess with this pattern anymore so I’m calling it a day. I’ve heard of other sewists that like this pattern, so don’t be put off by me. It may suit a different shape better.

So, bra number two was the Devonshire by Orange Lingerie. I thought I’d got the fit right after toiling the design and I even used my good lace for it, so you can imagine my disappointment when I tried it on only to realise that I’d moved the straps inwards too far and hadn’t added enough cup depth. This bra got put away and forgotten about last year and was what I picked up last week to study and learn from. I had enough lace left to try again so I decided to unpick the cups and make new ones.

In hindsight, my mistake with this pattern was possibly buying the size range that finished at DD when I should have bought the size range starting at DDD. It would most likely have meant a lot less faffing. Anyway, I forged on and I made a toile of some new cups and basted them into the bra cradle. I realise that I had a flat spot at the side so I ended up adding another seam to create a little extra shape at that point. I fitted them again and the adjustment worked! I made my new pattern on cardboard so I could use it again and again. The result of all my hard work is a bra that fits me pretty well and looks pretty too, yay! I won’t lie, I did a little happy dance when I tried on my newly finished bra. And it looks so nice, even if I do say so myself 🙂 I can still make some teeny, tiny improvements to my next version, but I’m so, so pleased with it for a first effort at sewing a lacy bra.

Here are a few detail photos for you to enjoy:

Of course, I wasn’t going to stop at just making a bra. I wanted a matching set so I’ve had a go at knicker making too and they’ve turned out to be a big success. I bought the Binky panties pattern by Evie La Luve on Etsy, but to be honest you could just as easily chop up a pair of old undies and take a pattern off them. The fabric I’ve used is a bamboo jersey which is renowned for breathability and feels lovely to wear. I used a small area of it on my bra in order to make the set nicely coordinated.

The thing I had the most difficulty with while making the knickers was gauging the length of elastic to sew on around the front leg opening. After a search online it seems there are no hard and fast rules because each elastic is different in its stretchability and it also depends on how tight or loose you prefer it for comfort. Suffice to say that it took me two tries to get mine right. I still need to perfect my zig-zag stitching when sewing on the elastic and I think I need to make the pattern a little wider at the waist because it’s obvious from looking at the photos that I’ve slightly stretched the fabric onto the elastic instead of vice versa. However, what I have is a comfy and snazzy pair of knickers which I’m very pleased with.

Again, here’s a few progress shots and the finished knickers:

As I promised here are some links to the different articles and websites that I found really useful in my quest to learn about lingerie making:

Here are a few UK suppliers. Bear in mind that you may need to buy from several different websites to gather supplies. I can’t always get everything from just one supplier.:

Ok, so that’s the beginning of my bra making journey. Now to show you quick make that I sewed last week and it’s the Claudia Tank by  Just Patterns. I haven’t dedicated a whole post to it because quite frankly this pattern has gone viral. It’s all over Instagram and the blogoshpere so I would just be repeating what many others have already said. Suffice to say that it’s a lovely quick and easy make, is very well drafted and really on-trend. There are small optional shoulder pads which I think are a big part of the look. The recommended fabrics are robust jerseys or lightweight Ponte knits. I used a substantial single jersey in a viscose/lycra blend which was a remnant in my stash.

I stitched most of my top together on my overlocker and like many other sewists, I covered the shoulder pads in the main body fabric for a nice cleaned coordinated look inside.

I had some fun styling my Claudia tank for a Reel that I made for Instagram and here are a couple of looks from that (sorry the quality isn’t quite as good as usual as these weren’t taken with my DSLR and the light wasn’t great):

I tried this pattern on a whim because it had only just been released and Delphine had an introductory discount on offer, but I discovered how much I like it. I’ll probably make another sometime which I might try a different neckline on. I had fun styling it and I particularly liked it with my cream jersey culottes. Roll on Summer!

So that’s me done for this week. I hope you enjoyed reading about my lingerie making adventures. Have you ever made a bra? Are you tempted to try? I think it can get addictive once you get a pattern that fits well. and there are so many beautiful lace fabrics to tempt. Let me know your thoughts in the comments. 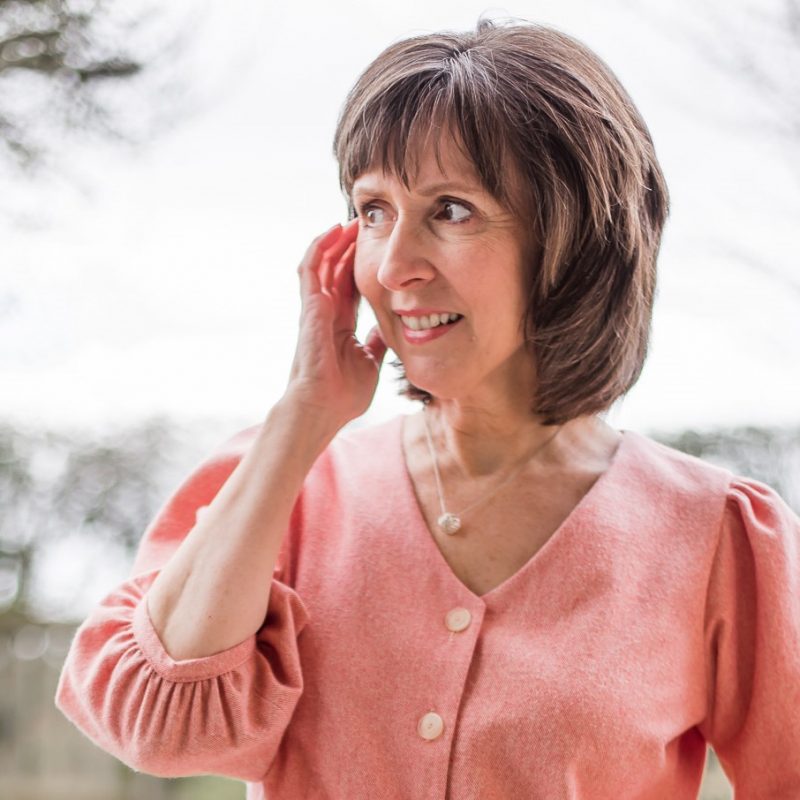